Fern was raped while travelling, and spent a year waiting for support abroad before seeking help several times from her local Rape Crisis on returning to London. Unfortunately each time their waiting lists were closed. She spoke to us about the impact of being turned away.

It was so incredibly disheartening to hear that I couldn’t even get myself on to a waiting list for support. I had plenty to distract myself with when I was first told, since I had just come back to the UK, started a new job, moved back to London, and moved into a new house. I had learnt how to use distraction as a coping mechanism, but as those areas of my life became more settled, I found it harder to ignore the overall sense of dread I felt on a daily basis. I hit my lowest point when I asked for help for a third time in March and was told that the waiting list was still closed.  I didn’t go to work for the rest of that week. I just felt so completely helpless and I really couldn’t see a way out.  I couldn’t stop crying which infuriated me even more since, up until that point, I had clung onto the fact that I’d barely cried since my attack with a foolish sense of pride.

In the end I emailed my Head of Team and told her everything. She signed me off work for the rest of the week, put me in contact with a private trauma therapist, and arranged for my employer to foot the bill. I don’t think I will ever be able to find the words to express my gratitude to her.

Now I’m going to work, paying bills, maintaining relationships and friendships etc., but I am in the very early stages of what I know is going to be a lengthy recovery process.  I am a lot more emotional than I was even a couple of months ago, and I have very little interest in socialising anymore. It is rare for me to go a week without having nightmares, and these have even started happening during my waking hours. I really struggle to express how I feel on a daily basis and sometimes that feeling of helplessness does just completely consume me and I struggle to see a way through it.

I wish I could put a more positive spin on it but in all honesty, I find myself so utterly exhausted by the process I’ve gone through to get some form of help, I just don’t have it in me to pretend anymore.  We need to speak more openly about the toll being denied support over and over again takes on survivors.

I was raped in July 2016. I started treatment in March 2018, and only then because my employer stepped in. I have accessed the support I have now from a position of privilege. So few survivors of sexual violence find themselves in that position and, knowing how impossible this has all been for me, it makes me rage to think about how much worse it must be for those victims already ostracized in society.

I am so sick and tired of consoling myself with the fact that I am one of the ‘lucky’ ones. No survivor of sexual violence should have to consider themselves lucky. Frankly, we need to talk more about how deadly those waiting lists can be.

So much needs to change. Victims need to know that they will be listened to and believed.  They need to trust that reporting their assault will lead to justice and conviction of their attacker. Police, friends, family, strangers on twitter need to stop asking victims how much they drank, or what they were wearing, or how many sexual partners they’ve had. Victims must be given emotional and physical support and treatment the moment they ask for it.  Recovery from sexual violence should not be the victim's burden. We all have a voice and each individual story matters. We won't stay hidden any longer.

My plea to you all is simple, really. Listen to victims when they speak. Challenge victim-blaming, rape jokes, and predatory behaviour at every turn. Echo us when we ask why support services are so under-resourced that they have to start turning victims away.  Fight with us when we demand to know why conviction rates for sexual violence crimes remain so disproportionately low, despite an increase in the number of victims reporting their assault.  Donate to organisations like Solace who are doing all they can to tackle such a socially ingrained issue, so that they can effectively support all those who walk through their doors.

None of this is difficult to do - especially if we’re all doing it together - and comes from a position of kindness. Kindness isn’t too much to ask for, is it?

Donate today so we can help more women like Fern 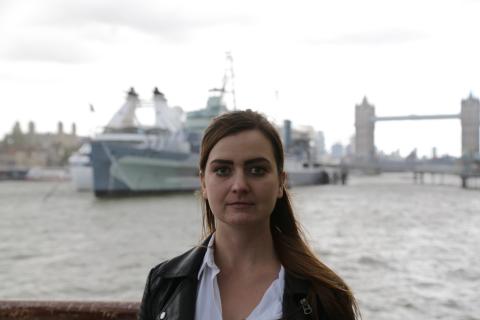