The central question many survivors of abuse ask is – ‘why me?’  There is this dangerous idea of deserving abuse that I wish to dispel, for there is no such thing.

Four in ten victims of domestic abuse in the UK are repeat victims. We scan their backgrounds to find out why, how could it happen to them – what went wrong. This is victim-blaming, however subtle. It is the perpetrator we must focus on, those who deliberately seek out vulnerability and time and time again destroy boundaries of trust, love and care.

When I was just nineteen I fell in love with a man who did just that. The violence began when by chance I discovered his addiction to drugs. When I confronted him he pinned me against the wall by my neck and hit me. My mind interpreted this as a sign that he was really struggling, it made me want to stay and help him. The violence escalated to the point where he would regularly attack me and try to burn my house down. I was living on edge. It only ended when he ran me over with his car as I was crossing the road. I flew onto the bonnet and rolled off, lucky to not sustain serious injuries. An eyewitness account secured his prosecution and I was safe.

I moved on to have a healthy non-violent relationship for ten years and we had two children together. The relationship eventually broke down and I became a single mother without support. I was at a very low point, questioning how I could be a good role model for my children, how I could have a stable career. I was vulnerable to the point I started self-harming to cope with these negative thoughts.

It was around this time that I met my next partner. He came across as intelligent, softly spoken, handsome and well presented. I thought to myself, ‘wow I can’t believe my luck – someone sees my strengths and potential despite my feeling of weakness. Here is this wonderful person who is interested and believes in me.

He portrayed a relaxed image of success and I had no reason to doubt his intentions when he asked me to lend him money to help him sell his house. Still, I did my research to be on the safe side and check what he was saying added up, I was not about to lend money to someone I barely knew without being somewhat suspicious. I had a mortgage overdraft facility and thought, this man has brought me back to life, the least I could do is repay his kindness and lend him money I thought would be repaid.

It was a week after I lent him this money that he was first violent. We got into an argument in the kitchen and in the heat of the moment I threw some pasta at him. He immediately retaliated by slapping me across the face. I was shocked but thought to myself, he’s right, I have been disrespectful and he had retaliated in the way that he thought was just – it wasn’t his fault. I believed that as long as I behaved appropriately this wouldn’t happen, sowing the seed of being subservient.

His moods soon began to alternate between showering me with affection and enthusiasm and then creating unexplained distance and unreliability. It weakened me, I became desperate to get back to the place where he was happy and I was the object of his affection.

After six months he became a workaholic, talking endlessly about business plans for our future. He convinced me to sell my property and invest the money with his business contacts. I felt intensely grateful to him for taking time out to help me and I relinquished more and more control over my finances as I so wanted to believe his words that this was “all for us, for our future”.

Then I fell pregnant. At first he was delighted, singing to my stomach and excited about our future as a family. Then he began to become more controlling, asking me not to tell anyone and isolating me from my family and friends. He started to regularly go out at night and not come back. One day I was crying about his behaviour and he hit me across the face once more. When I was four months pregnant he gave me a black eye. One day he hit me so hard I fell to the floor and I was worried that the knock had damaged my child. I was living on eggshells and yet despite this I truly loved him and I thought we could work through our problems.

Whenever I talked about financial concerns he would get angry and would say that he had already explained what was important. He would speak at length using terms I never understood like “hedge fund”, never making anything clear. These conversations were exhausting and so I went along with it hopeful that all was in hand.

His drinking habits increased and he started to display erratic and delusional behaviour that made me nervous. I continued to make excuses, thinking perhaps he was struggling with the recent death of his brother and that he was about to become a father.

When our son was born he was noticeably hostile and distant towards me. I remember clearly just home from the hospital, exhausted and sitting on the sofa with our child. We had an argument and he slapped me across the face with the baby in my arms. This was when the mask slipped for the first time. He said ‘either you can leave me the baby now or I will destroy you in court and you will lose all your children.’ I felt really frightened for the first time, sensing that my child and I were in danger.

I knew I had to think quickly and so I discreetly put my phone on record while he continued to threaten me. He described in great detail how he would disfigure me, have me killed and frame my death as suicide, how our son would never know who I was. I didn’t think I was going to come out of that house alive.

All I was thinking about was that I wanted my mother and children to know the truth, and if I died, at least the recording would exist and someone would find out what really happened. In a desperate bid to find safety I made an excuse to go to the kitchen and phoned his sister to come pick me up. Thankfully she played along, calling to say she wanted to come and spend time with the baby.

He left us to go out and that was the last time I ever saw him. This panic took over me, I knew he could come back at any moment and I packed whatever I could find and went to a friend’s house to phone the police.

The police referred me to Solace Women’s Aid where I could obtain support. They were so supportive, giving advice and attending court with me. Solace were truly amazing, I really felt that for the first time I had someone fighting my corner.

A court case ensued lasting three months where I was cross examined and asked ‘why didn’t you leave, why didn’t you tell somebody, why did you allow him access to your money?’  The lawyers tried to make me feel like I was to blame for everything. The recording was crucial to his conviction and he was given a two year suspended sentence.

I attended the ARISE support group that helped me come to terms with the abuse I experienced. It was brilliant. It made me realise I wasn’t the only person that goes through this, that it is something that affects people from all walks of life. The focus was on learning and moving forward which was so helpful. Solace genuinely helped. If it wasn’t for that support, that space – I am not sure I would have found my strength. I am happier today than I was before I met him.

I have since dedicated myself and my art to raising awareness of domestic abuse in the community. I want all survivors to know that they can rise above the past, that going through such ordeals can empower you. I lost everything I owned, I nearly lost my life. Financially I am still going through hell. Despite it all, I am now more accepting, allowing and kinder to myself. I am grateful to be alive, to be with my children. I no longer blame myself for somebody else’s bad behaviour. It is never the victim’s fault and I challenge all those who institutionally or personally try to prove otherwise.

Do something incredible like Imogen and hold an event in your community. 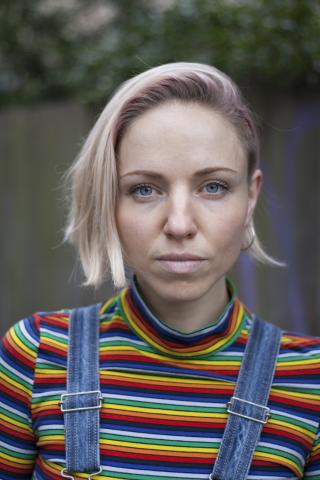