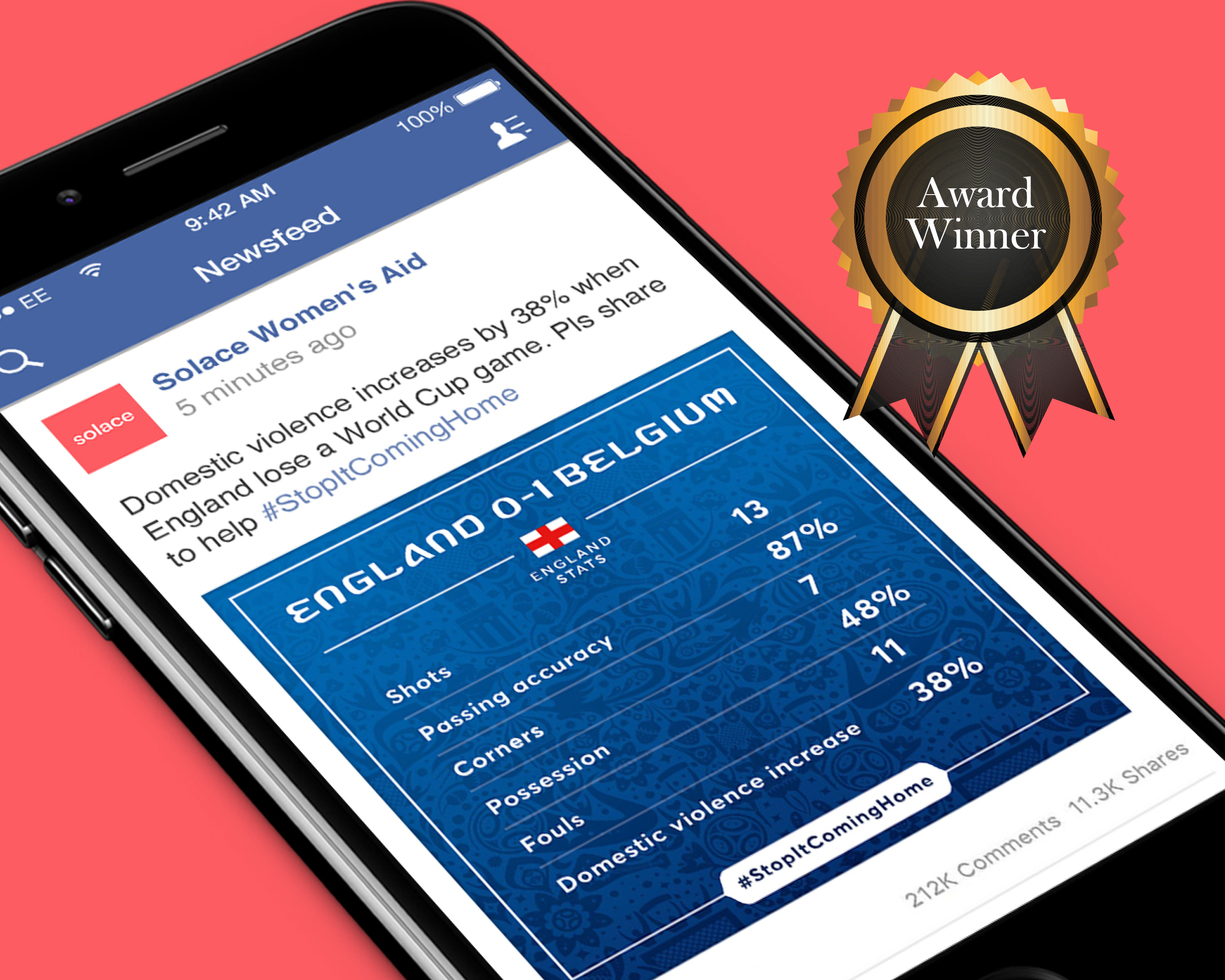 Stop it coming home. Not exactly a phrase on everyone’s lips right now. England are winning again, the Lightning Seeds are set to top the charts and all everyone wants to do is to enjoy the football.

Unfortunately, here at Solace – and every other women’s aid charity – we can’t talk about football without talking about domestic violence as well.

You might have already read about the link between domestic violence and England World Cup games. It all stems from this study from Lancaster University that uncovered some very uncomfortable statistics – namely that when England lose a World Cup game, incidents of domestic violence increase by 38% and (even more shockingly) by 26% when they win.

We wanted to put an end to this ugly side to the beautiful game, so we came up with our #StopItComingHome campaign. The campaign has won gold in The Drum Social Purpose Award 2018.

The problem with uncomfortable facts is that they make people uncomfortable. No one wants to talk about domestic violence when England might actually do the business in Russia.

“There’s a time and a place for this sort of thing”, “women hijacking our first world cup semi in nearly 30 years, disgusting (sic)” and “[email protected]*k off. It’s coming home (sic)” are actual responses we’ve gotten to a campaign against domestic violence.

Seriously? I’m sorry, but 52 years of hurt are nothing compared to the fear and anxiety the wives, girlfriends and partners of abuser undergo before and during a match. They’re on the edge of their seats fearing the worst – and know that the worst is likely to happen.

By now, it’s clear that major sporting events are the catalyst for a rise in domestic violence.  It is a heady combination of tribalism resulting in ‘toxic masculinity' and aggressive behaviour triggered by alcohol consumption.  They experience the emotional stress of the game, and there is a whole issue around competitiveness and testosterone levels.

But despite all that, sporting events are still just a catalyst – not a cause.

Let me be clear here, we’re not blaming football. Most fans watch a game without becoming aggressive. For some however, it exacerbates an underlying problem. It causes them to become violent and vent their anger on those who are closest to them – including their children.

That’s why it’s important to understand the way an abuser acts.  Some common behaviour will already include:

As you can see, we’re not talking about average football fans here. But we now have strong evidence that abuse against wives, girlfriends and partners spikes dramatically in the aftermath of matches – whether their team wins or loses. At Solace we support women and men, but the overwhelming majority of victims seeking our help are women, and that is the fact of the matter.

So we launched #StopItComingHome to give real fans – men and women – permission to have this uncomfortable conversation, and tackle the issue head on.

You Can’t Heal What You Don’t Reveal

While most domestic violence campaigns tend to use shocking imagery (which can sometimes overpower the message behind it), we wanted to take a different approach, focusing on the shocking statistics instead.

We started by tweeting out the real stats after each England World Cup game – including our domestic violence stats along with them.

Laying the stats out in black and white like this makes them impossible it ignore, and our hope is that people will spread them around.

As England go from strength to strength and football mania reaches fever pitch, our campaign is becoming even more relevant – and it’s great to see more and more people getting involved with every game. But we’ve still got a long way to go.

But once the game’s over, please, please, please support, like and most importantly share our #StopItComingHome campaign – and help us end violence towards women and young girls now.

Let’s bring football home, not domestic violence – please support, like and share #StopItComingHome before, during and after tonight’s game.